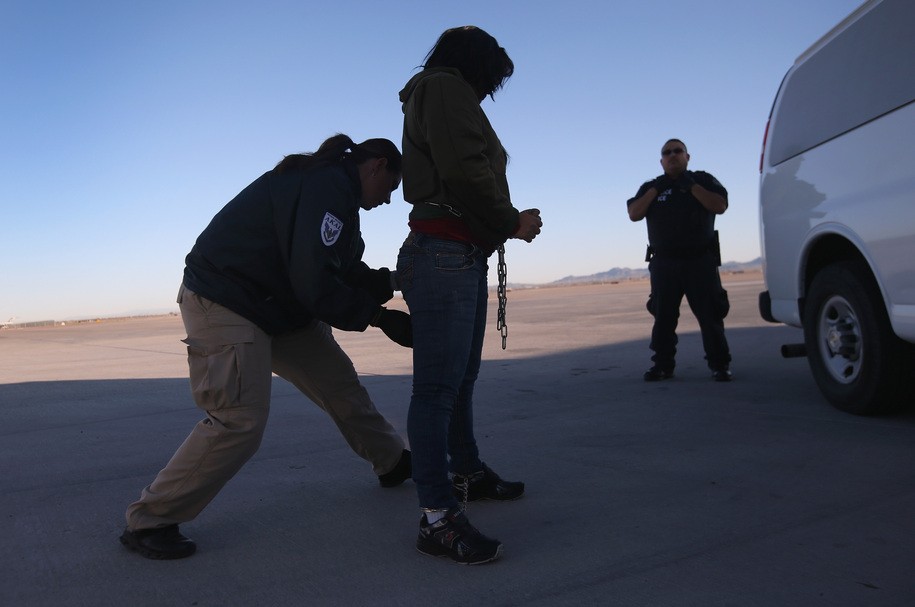 A woman previously detained in Texas is alleging that in the hours immediately preceding her deportation to Mexico in 2018, she and two other women were raped by men working inside the detention center. She is now suing the private prison company that operates the facility, its subcontractors, and the federal agencies involved, including Immigration and Customs Enforcement (ICE).

In February or March of 2018, Jane Doe was taken into ICE custody and detained at the Houston Processing Center for approximately three months. On the afternoon of June 1, 2018, she says she and two other detained women were transferred to an isolated cell where they were held for hours before three men in plainclothes appeared around midnight with their faces covered. Jane Doe says she was beaten and raped by one of the men, and that the other women in the cell were also assaulted. One of Jane Doe’s attorneys, Jose Sanchez, told Prism that Jane Doe was around 40 years old during the time of the attack.

After the three women were assaulted, Jane Doe alleges that they were left in the cell until around 5 AM on June 2, 2018, when men arrived and told the women to change their underwear and clothing. Jane Doe says they were then loaded onto a bus with male detainees and detention center guards, transferred to Laredo, Texas, and then deported to Mexico.

Once back in her hometown in rural Mexico, Jane Doe realized she was pregnant as a result of the rape. According to the complaint filed May 27: “She felt so hopeless that she did not want to live.” In early 2019, Jane Doe gave birth in Mexico and “suffered serious medical complications during the birth, leading to a substantial loss of blood and an approximately eight-day hospitalization.”

Along with the Department of Homeland Security (DHS), ICE, and the three male assailants, Jane Doe is bringing her civil lawsuit against CoreCivic, the private prison company that operates the Houston Processing Center and its many subcontractors, including Prison Realty Management, TransCor America, and Trinity Services Group, all of which provide transportation, meals, and other services to the detention center.

Sanchez told Prism that none of the federal agencies or private companies involved are going to voluntarily provide information regarding staffing at the time of Jane Doe’s rape, and because there was no criminal investigation by the U.S. Attorney’s Office, the lawsuit may be the only way that Jane Doe is able to obtain information about the man who raped her.

“We had to name anybody [in the lawsuit] that could have information about whether the assailants were employees of theirs. We don’t know who it was; it could be employees that work for any of these companies that have access to the facility,” Sanchez said.

ICE purports to have a “zero tolerance policy” for all forms of sexual abuse, but abuse is rampant in the agency’s detention centers nationwide. An analysis of 33,000 complaints of sexual assault and physical abuse filed with the DHS Office of Inspector General between January 2010 and July 2016 found that more abuse complaints were filed against ICE than any other agency within DHS. Even more recently, an April 2018 investigation by The Intercept reviewed 1,224 complaints of sexual and physical abuse filed by detained people between 2010 and 2017. More than half of those accused of abuse worked for ICE.

CoreCivic, the nation’s oldest and largest for-profit private prison corporation, operates more than 70 facilities across the country and is one of ICE’s largest contractors despite decades of documented cases of sexual violence, abuse, medical neglect, and in-custody deaths spanning both the company’s immigrant detention centers and prisons.

Sanchez and co-lead attorney on Jane Doe’s case Michelle Simpson Tuegel acknowledged to Prism that Jane Doe’s case will be an “uphill battle.” All of the agencies and companies involved are notorious for their failure to release information related to the abuse of immigrants in custody⁠—and if it weren’t for a church friend in Texas encouraging Jane Doe to speak out about her abuse and obtain legal counsel, her rape may have been another abuse disappeared by deportation.

“Everyone listed in the complaint has a lot of power and a lot of control and they wield it in ways that protect them while incredible harm is done [to people in custody],” Simpson Tuegel said. “This is a huge scar for our country, and it’s connected to the protests happening right now. This is very connected to criminalization and mass incarceration. The federal criminal justice system and the immigration detention system are profit-led problems. These are private companies contracted to take our tax dollars and when things like this happen, we can’t be okay with letting them get off the hook.”

Tina Vasquez is the senior reporter at Prism. She covers gender justice, workers' rights, and immigration. Follow her on Twitter @TheTinaVasquez.
Follow us on social for stories the mainstream media isn’t covering.
Want to support a new type of media outlet? Donate to Prism today. Our 100% women of color-led newsroom challenges toxic media narratives.
Donate Now →
Stories that challenge the status quo - right in your inbox.