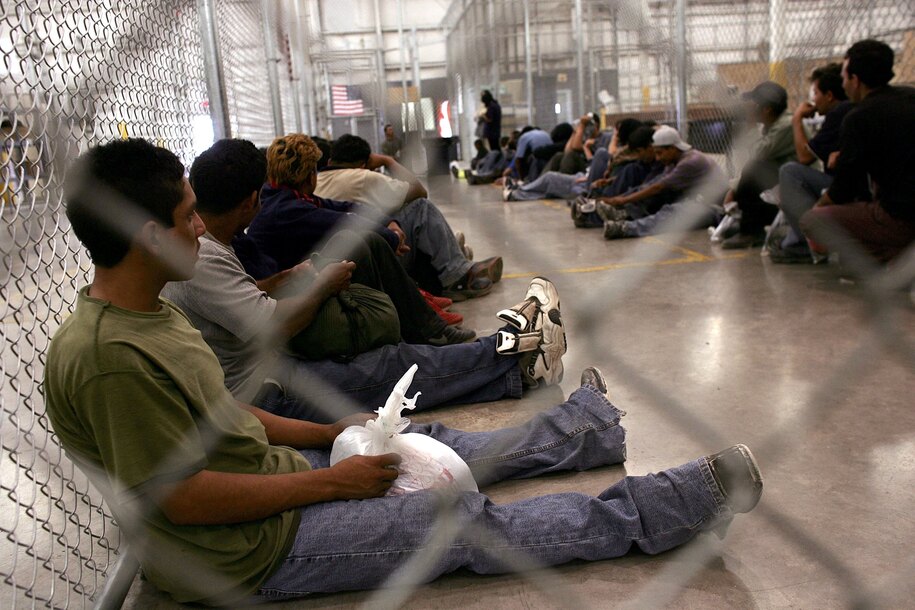 As they watched the news on TV in late May, the men in locked in Unit C of the Mesa Verde immigrant detention center in Bakersfield, California, began to see the same images as the rest of the world: cops across the United States beating protestors, reports detailing the police homicide of Breonna Taylor, and the horrific footage of a Minneapolis police officer suffocating George Floyd to death.

Earlier that month, Donavan Grant, a Jamaican immigrant, had helped lead the men in Mesa Verde on a hunger strike to protest their conditions during the COVID-19 pandemic. Grant had been paroled, but those remaining in the Southern California detention center began to discuss the possibility of another hunger strike—and not only to protest their own treatment during the pandemic. They wanted to be part of the struggle for Black lives. As they talked, the men agreed that even though they were in detention, they needed to stand in solidarity with those protesting around the U.S., and around the world.

On June 4, Asif Qazi—one of the men who had been in detention since February—handed a piece of paper to one of the guards in the privately operated Immigration and Customs Enforcement (ICE) detention center. It contained a statement he had written announcing the immigrants’ hunger strike:

“We, the detained people of dormitories A, B, and C at Mesa Verde ICE Detention Facility, are protesting and on hunger strike in solidarity with the detained people at Otay Mesa Detention Center. We begin our protest in memory of our comrades George Floyd, Breonna Taylor, Oscar Grant, and Tony McDade. Almost all of us have also suffered through our country's corrupt and racist criminal justice system before being pushed into the hands of ICE,” the statement read in part. The mass protests against police violence had officially reached ICE detention.

Reached by phone the next day, Qazi said almost everyone in the 70-person dorm had joined the strike. He says that he, like others in the strike, sees their struggle for justice in ICE detention as aligned with the Black Lives Matter movement.

“We support their cause for protesting against a corrupt justice system and corrupt law officials,” he said. “We’re trying to intertwine our causes in one general fight for justice, and we believe ICE falls in the category of corrupt justice officials.”

Though he was born in Bangladesh, Qazi spent most of his life after age six in a majority-Black neighborhood in East Berkeley, California. “I saw with my own eyes that police racially discriminate against minorities, and especially Black people, every day.” he said. Growing up with mostly Black friends, he says he both witnessed and experienced that discrimination. Today, he has two Black daughters. “But I do want to say that I will never be able to say that I’ve experienced what they’ve experienced, because I’m not Black,” Qazi said.

Though Qazi helped organize the strike as a show of solidarity between different immigrant communities in the detention center and African Americans. He made a point of the fact that Black detained people—like Donavan Grant—were part of the organizing.

Attorneys and advocates say that in ICE detention centers across the country, Black immigrants have often been at the head of hunger strikes and other peaceful resistance.

“I’ve noticed that Black immigrants have often been involved in leadership, and organizing on the inside,” said Lisa Knox, managing attorney at Centro Legal de la Raza, an Oakland-based organization that works with detained immigrants across California, including at Mesa Verde. “Perhaps it’s because folks who are the most marginalized are the most willing to speak up; and they’re often the most aware of how systems of oppression work.”

While most immigrants portrayed in the media are non-Black Latino, immigration is decidedly a Black issue: Across the country, Black immigrants from Cameroon, Mexico, Ghana, Haiti, Jamaica, Ethiopia, Brazil, and other countries are currently in ICE detention. In the past, ICE has also mistakenly detained Black U.S. citizens—including Davino Watson, who was illegally held in ICE detention for more than 1,200 days.

There’s evidence that Black people are targeted disproportionately for deportation. According to a study completed by the Black Alliance for Just Immigration, while Black people represent just 7.2% of the undocumented population in the U.S., they are greatly overrepresented in the immigration legal system. Over 20.3% of people facing deportation because of criminal charges are Black.

A run-in with criminal law can lead both undocumented and documented immigrants (such as people with green cards) into ICE detention. According to Knox, this explains why Black people are so overrepresented in criminal charge-based deportation proceedings: Black communities in the U.S. are over-policed and over-incarcerated, and as a result, Black immigrants are disproportionately funneled into the immigration legal system. (Immigration violations are a matter of civil law, not criminal law.)

Knox says that, as a Black woman with a Latina mother, she’s always seen the criminal justice system and immigration system as intertwined: “They’re both part of the targeted mass-incarceration of Black and brown people.”

Advocates have long alleged that anti-Blackness permeates the U.S. immigration system. Detained immigrants and attorneys say that racism is present from both guards inside detention centers and judges in courtrooms. Knox says that when she represents Black clients, she’s noticed that immigration judges are more likely to see her clients as “violent” or “dangerous.” One of her clients had a lengthy arrest record, but absolutely zero convictions. “I had to try to explain to the judges how there’s overwhelming evidence of racial profiling in law enforcement,” she said.

In the current moment, Knox claims that ICE has tried to take advantage of the “violent” Black immigrants trope. Soon after the hunger strike in Mesa Verde began, ICE released a strong statement leveling serious accusations against the organizers. Citing anonymous sources, ICE claimed that it encountered “correspondence where at least one detainee was threatened with physical harm by other detainees if the individual did not participate in the hunger strike.”

Qazi called the statement “complete lies,” saying: “There are seven or eight people in this unit who are not hunger striking, and no one has threatened them or bothered them at all,” he said.

“It’s insulting and frankly racist, the way [ICE] implied that these immigrants—and the Black leadership in particular—are violent or threatening; it’s playing into the idea that these are violent thugs,” Knox said.

Over the weekend, Qazi and the men in the dorm prepared a video, which they shared with the Interfaith Movement for Human Integrity. In the powerful video, dozens of men hold handmade signs that with slogans like “BLM,” “Change the System,” and “Para la discriminación” (stop the discrimination). “We stand with the Black Lives Movement, and against the system that took the life of George Floyd, Breonna Taylor, Tony McDade, and so many Black people,” one man said. He also shares demands for ICE to release immigrants, and calls on the governor and attorney general of California to use their powers to investigate the conditions in for-profit ICE detention centers in the state, where immigrants have claimed social distancing is impossible, and where at least one man—Carlos Escobar-Mejia—has died from COVID-19.

“We want to bring awareness to the people who are protesting not just in the streets, but also in here,” another man shared. “We want to give a voice to protestors who are immigrants.”

Jack Herrera is an independent reporter covering immigration, refugee issues, and race. His work has appeared in The Nation, Politico Magazine, Columbia Journalism Review, Pacific Standard, and elsewhere. He is an Ida B. Wells fellow with Type Investigations at Type Media Center.

Jack Herrera is an independent reporter covering immigration, human rights, and Latinx issues. His work has appeared in The Nation, The New Republic, Politico Magazine, and elsewhere. He’s a current Ida B. Wells Fellows with Type Investigations.
Follow us on social for stories the mainstream media isn’t covering.
Want to support a new type of media outlet? Donate to Prism today. Our 100% women of color-led newsroom challenges toxic media narratives.
Donate Now →
Stories that challenge the status quo - right in your inbox.