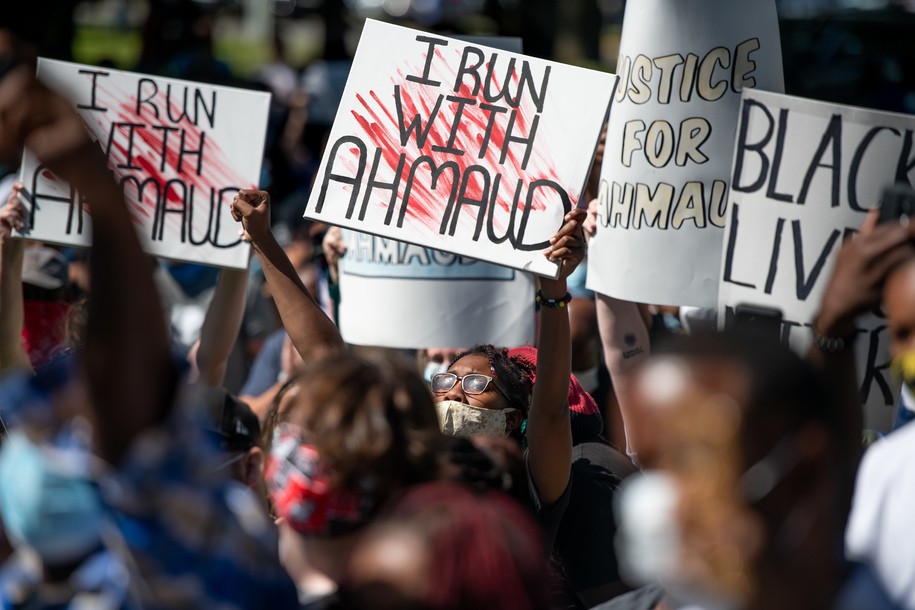 Under the banner of JUST Georgia, a collective of Georgia advocates, attorneys, faith leaders, community members, and organizations have joined together to demand the first two district attorneys to handle the Ahmaud Arbery case be held accountable for their actions. They are joined in this effort by national organizations like the Working Families Party and Color of Change PAC.

Building on organizing by local leaders, including Dr. John Davis Perry II, the president of the Brunswick Chapter of the Georgia NAACP, JUST Georgia is making several demands for prosecutorial accountability as well as independent investigations of potential law enforcement misconduct.

Speaking with Prism, Perry framed Arbery's murder as another example of the injustice happening across the country. But for Perry, the case provides an opportunity for citizens at the local level to come together and ensure that justice and accountability are achieved, working along with the statewide coalition.

“Beyond getting justice in his case, local officials must be held accountable for us to have any confidence in what we call the ‘justice system,’” said Perry. “I believe that the climate of our nation is that there's a passion that's rising up in people, and they want to see the justice system be what it has promised to be.”

Arguing that Brunswick County Judicial Circuit District Attorney Jackie Johnson and Waycross Judicial Circuit District Attorney George Barnhill have violated the district attorney oath of office and several sections of the Georgia Rules of Professional Conduct, which apply to all attorneys who practice in the state, the JUST Georgia collective called for their immediate resignation. Read the full list of demands here.

An electoral prosecutorial accountability strategy would include informing citizens about the upcoming election and the role of a district attorney. As previously reported by Prism, Jackie Johnson is up for reelection and has a troubled history in the district since taking over as district attorney, notably in her handling of cases involving current and former police officers. The elder of the two McMichaels, who were arrested in the killing of Arbery, was a former officer and had recently retired from serving as an investigator in Jackie Johnson’s office.

“Elections are a periodic check from the citizens,” said Francys Johnson. Johnson also described the importance of holding prosecutors and district attorneys professionally responsible for misconduct and, where the severity of the conduct warrants it, holding them criminally liable. Finally, he advocated for a need to change the system that gives prosecutors and district attorneys their grant of authority and address various legal fictions and loopholes that often allow for injustice to persist.

“When the system isn't working it doesn’t matter who you put in the place to run it,” said Johnson. “Even when you put [in] Black prosecutors, like we have in Atlanta, we still see the same thing: miscarriages of justice. If you don't change the game and you only change the players, you'll get the same outcome.”

In his statement, Carr notes key information was withheld in the first two requests to have special attorneys assigned to this case. Jackie Johnson and Barnhill failed to disclose to the attorney general that Barnhill had been involved in assisting with the case for four days prior to the official request on Feb. 27. During that interim period, Barnhill reviewed evidence and advised the Glynn County Police Department they did not have probable cause to arrest the McMichaels. Carr noted that Barnhill again failed to disclose his involvement prior to appointment in his April 7 request to appoint another prosecutor. Barnhill also failed to explain why it took nearly a month to disclose his conflict of interest as his son, a prosecutor in the Brunswick Judicial Circuit District Attorney’s Office, had handled a prior prosecutor of Arbery and that the elder McMichael had served as an investigator on the same prosecution.

Since this story first broke, two Glynn County commissioners alleged that Jackie Johnson had interfered in the case when the killing first took place. In a recent Atlanta Journal-Constitution article, Jackie Johnson denied the accusations, claiming she was simply trying to help the Glynn County Police Department. Johnson blamed the issues in the case on dysfunction within the Glynn County Police Department, but she did confirm “that her office had suggested Waycross District Attorney George Barnhill confer on the case.”

For the JUST Georgia collective, this case is a part of a larger systemic failure.

“We must continue working towards a system which addresses both the immediate and the long-term needs of Georgians impacted by all systems of oppression," said Tiffany Williams Roberts, community engagement and movement building counsel for the Southern Center for Human Rights.

“Ahmaud’s life and legacy demand that we fight injustices wherever we see them: in precincts, at the legislature, [and] in our own communities.”

CORRECTION: An earlier version of this article incorrectly stated the title and name of Dr. John Davis Perry II. The error has been corrected.

Anoa Changa is the electoral justice staff reporter at Prism. Follow her on Twitter at @thewaywithanoa.
Follow us on social for stories the mainstream media isn’t covering.
Want to support a new type of media outlet? Donate to Prism today. Our 100% women of color-led newsroom challenges toxic media narratives.
Donate Now →
Stories that challenge the status quo - right in your inbox.