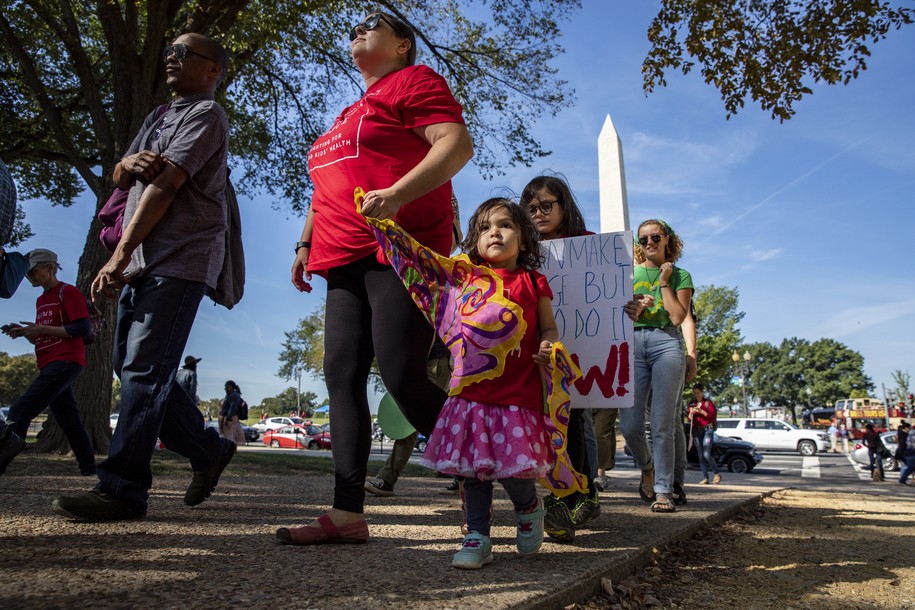 Becoming a mother solidified my passion for activism. From the maternal health challenges that plagued the births of both of my children to the wide scale manifestations of bias from which I hope to protect them, activism seemed like an unavoidable consequence of mothering while Black.

My family’s journey has been documented in the public record. A 2017 clip from my local newspaper in Cheyenne, Wyoming, features me holding my then-one-year-old son in one hand and a sign that reads “Ain’t I a woman” in the other. A more recent photo features me as a keynote speaker at the Women’s March that took place earlier this year.

As these photos attest, my children and I have marched, provided testimony at city hall, and have been to a ton of meetings about the small ways we can make our community better for marginalized people. Motherhood is as much a part of my activist journey as my passion for racial, gender, and sexual equality. But there are times that the annoyed glances and frustrated sighs by others make me want to stay home.

I inquire about the “child-friendliness” of a space before almost every event I attend. Yet most often, I’m disappointed. The most recent time was in late January. I didn’t want a lack of childcare to prevent me from going to Citizens Advocacy Training that was being held at our local library, so I asked my friend to contact them ahead of time to see if children were welcome in the space.

The director of advocacy outreach gave an enthusiastic yes. “Children are certainly welcome! It’s never too early to learn about civic duty, right?” she said.

But when my friend and I arrived at the roundtable-style meeting at the library, the atmosphere didn’t match the response. Perhaps she was imagining older children, but mine are four and one years old. I felt severely out of place.

Each time one of my children would make a sound—a laugh or a cry—the man two seats over would send a dramatic dagger-filled glance my way. His scowls seemed to say, “Why would you bring children here? Don’t you know this is a meeting?”

I was so uncomfortable, wondering if more people apart from the individual who wouldn’t stop staring at me felt that I didn’t belong. Given my discomfort, I didn’t retain anything from that 90-minute training.

By the time the meeting was over, I’d already decided I wouldn’t be back. The director of advocacy had made a significant semantic mistake. Children weren’t welcome in that space as she’d said; they were merely tolerated.

Physical and social expectations in activist spaces communicate that parents with children in tow aren’t really welcome, especially when changemakers try to bring in remnants of professionalism. Folks refuse to accept that children are children, not miniature adults.

If children were truly welcome, non-parents wouldn’t default to anger when a child cries during a presentation. There wouldn’t be confused, bugged-eyed looks around the room when a parent asks for a place to nurse or pump. Organizers must understand that I can’t just leave my status as a parent at the door.

Increasingly, some do. I’ve been fortunate to experience truly family friendly activist spaces. What made them unique wasn’t just the way they assured me that my children’s presence wasn’t an issue. It was the way they anticipated my needs as a mother and understood that mothering outside of the comfort of my home was much harder on me than it was on them.

For example, during a community training on how to become rapid responders to document the treatment of immigrant families during ICE raids, an older lady supported me so attentively that I wanted to cry—she offered to hold my daughter, made sure I was taking regular restroom breaks, and ensured I had the space to comfortably nurse. It wasn’t just her. Every individual present expressed their willingness to hold my daughter so I could write, engage, or just breathe.

The way they held us with love set a precedent that I hope to recreate in my own organizing work. I’ve stopped seeing myself as a burden. If an organization isn’t willing to make room for the complexity of my full self, they aren't for me.

For the last seven months, I’ve been facilitating my own small cohort of folks that aim to bring the reproductive justice framework to Wyoming, where I live. My term ended recently, but it has forever changed my expectations of how parents should be treated. I worked hard to make the framework real by emphasizing “the right to parent the children you already have in safe, healthy environments.”

To encourage participants to show up as their full selves, I made sure our group welcomes children and selects child-friendly locations with ample space and food. During our meetings—which were often long—we anticipated witnessing a microcosm of life. Babies cry, moms need breaks, folks get hungry. We were real. Naturally, some meetings are more productive than others. But it doesn’t change my belief that we must strike down standards that make it harder for parents to access social rebellion.

I don’t believe we can have healthy communities without making sure parents have the support that they need. It’s impossible to create gender-inclusive, multiracial, accessible movements while leaving parents to grapple with the obstacles of finding care for every rally, meeting, or seminar.

Without parents there is no movement. And that’s not just because so many of us are “activated” by parenting. We’re also doing the important work of raising the next generation of changemakers. Family friendly activist spaces should be the first step in our movement building. How many new leaders could we have if parents were lifted and supported instead of pushed toward the back of the room, or out of it altogether? Imagine what it could mean for our children to grow up in activist spaces from birth and be nourished in a community of love and revolution.

Parents have much to offer. We simply need permission—and an invitation—to enter the space.

Prism is a nonprofit affiliate of Daily Kos. Our mission is to make visible the people, places, and issues currently underrepresented in our democracy. By amplifying the voices and leadership of people closest to the problems, Prism tells the stories no one else is telling. Follow us on Twitter @ourprisms and on Facebook.

Follow us on social for stories the mainstream media isn’t covering.
Want to support a new type of media outlet? Donate to Prism today. Our 100% women of color-led newsroom challenges toxic media narratives.
Donate Now →
Stories that challenge the status quo - right in your inbox.